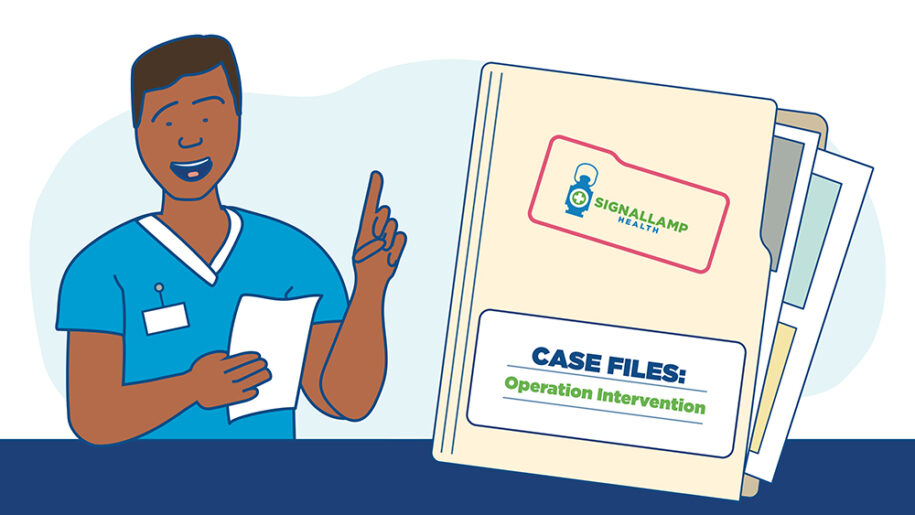 When Signallamp Health’s remote nurse case managers check in with their chronic disease patients, their training teaches them to never let down their guard. When patients brush off new but perhaps subtle symptoms, that’s when Signallamp nurses know to dig in. Their dedication through chronic care management has led to some breathtaking, life-saving interventions.

These stories show how routine telephone check-ins, coupled with a deep sense of trust, leads to profound outcomes. To protect their privacy, we changed the names and ages of the people in these stories, but the facts are all true.

Peter didn’t think much of the subtle tingling and numbness on the side of his neck. At 63, he’d gotten used to strange sensations that rose and eventually passed. His wife, Sylvia, assumed he had strained it.

Sylvia downplayed it when Reggie, Peter’s Signallamp remote nurse, phoned that morning for his monthly check-in. But something was bugging Reggie about it.

Reggie triaged Peter over the phone, then recommended an ultrasound and X-ray. Sylvia rebuffed, but Reggie insisted.

“I had a feeling about this one,” Reggie said.

The ultrasound revealed Peter’s carotid artery was 70% to 90% blocked. It was a massive stroke waiting to happen. Reggie’s intuition, advanced training as a nurse investigator and commitment to keeping Peter well led to an intervention, one that possibly prevented a stroke that could have killed him or left him permanently disabled.

Grace answered the phone when Signallamp remote nurse Lisa called for her monthly check-in with her mom, Judith.

Judith, who is 57, felt fine, Grace told the nurse, but she also mentioned that her mother’s leg itched and had started to swell a little and turn red. Suddenly, the original “all is fine” report sounded hollow.

Lisa worked quickly to triage Judith and, fearing cellulitis or deep vein thrombosis, sent Judith for a panel of tests.

An ultrasound ruled out DVT, but then Judith’s test results returned positive for the bacterial, and possibly deadly, infection cellulitis.

After leaving the clinic that day, Grace called her mom’s Signallamp nurse, Lisa. She confessed to Lisa that she hadn’t worried about her mother’s symptoms and had no plans to stage an intervention. She also revealed that Judith had suffered from cellulitis months earlier, and they hadn’t intervened quickly, which meant Judith spent months laid up in recovery, unable to walk.

Antibiotics quickly knocked the infection out, and Judith recovered fully within a few days.

Her smile gave it away

Patty, a Signallamp remote nurse case manager, got a call from one of her usual patients, Margaret, but it was outside of her regularly scheduled call time.

Margaret believed she had a tooth infection and said her left cheek was swollen. What happened next is exactly why Signallamp recruits former clinical nurses to become remote nurse case managers. They’ve spent time face-to-face with patients and have developed sharp diagnostic skills.

And in Margaret’s case, she was on the line with Patty, a former oral trauma surgical registered nurse, who walked through a full remote mouth assessment.

But Margaret had no other indicators for a tooth infection. Patty realized Margaret may be in more danger than a simple toothache. She told Margaret to get to a bathroom and smile in the mirror. To her surprise, the left side of her face sagged while the other curled up in a grin.

Patty began assessing Margaret for a stroke. Margaret admitted she had trouble speaking to a friend on the phone the night before. Her blood pressure was at 190/100. Patty instructed Margaret to get to the emergency room, where doctors determined she had experienced a transient ischemic attack, a small, brief stroke that can sometimes have devastating, lasting effects.

If not for Patty’s quick thinking, Margaret might have put off going to the hospital and could have suffered a full blown stroke. But now she’s on a new blood pressure medicine, and has more opportunities to smile the next time Patty calls.

Contact us today to learn how Signallamp’s remote nurse case managers stand ready to intervene with your chronic disease patients.

* These fields are required.

Your primary duties include but are not limited to:

Signallamp Health is growing rapidly, and we are looking for motivated RNs and LPNs to work with us! Work remotely while caring for patients and helping them better manage their chronic conditions.

Job Type: Full-time
Number of hires for this role: 5

Job Summary
We are seeking motivated, driven, tech-savvy, detail and goal oriented Licensed Practical Nurses and Registered Nurses to join our Care Management Team. This opportunity offers a competitive salary, full benefits, and a monthly incentive program driven by performance. Signallamp Health Inc. is growing rapidly, and we are looking for motivated RNs and LPNs. Our nurses work remotely while caring for patients and helping them better manage their chronic conditions.